This guy’s likely the same age as me. 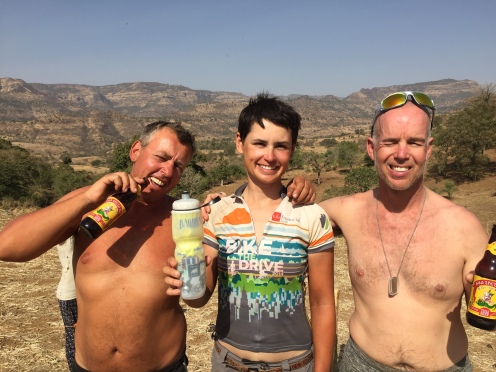 Just arrived in Bahir Dar after a short ride with a few rolling hills. (note, we are now at elevations in the 2,000 m. (6,600 ft) range).  My recovery is complete and I’m feeling great. Another rest day tomorrow, so the plan is to do the market today and get an outfit for our “Ethiopian Party” tonight. Everyone needs a lift and we thought a little theme party would be good for the spirit. Tomorrow we’ll do a boat ride out into  Lake Tana to visit a few monasteries on some small islands.

This and That;
Ethiopia has a population of over 100 million. After the Second World War there were 15 million. This population explosion is evidenced with the hundreds of kids that line the roads as we pass. Kids everywhere. At first it felt like riding in a parade, as they screamed ” Yu Yu Yu.” I was thinking it was some kind of welcome in their native Amharic tongue. Unfortunately, I found out at lunch that they were hollering “You, You, You,” the only words they knew in English. It soon became annoying as hell, as they continually yelled “You,” to get your attention.

In the Sudan, a highlight at the end of each day were the “donkey showers.” A young entrepreneur would arrive at our campsite with his donkey, and a couple of 55 gallon drums filled with water strapped on his cart. He would then sell his wares in plastic jugs for $0.50. The idea was to wash up and scrub off a couple layers of the dirt that had accumulated throughout the day. At first it was a little weird with all the kids standing around giggling and gawking at the white bodies, but soon you realized there was no escaping the notoriety.

Ethiopia is 62% Christian, 33% Muslim and the rest a mix of religions. It was the first country in the world to adopt Christianity as their state religion.

In grade school the kids learn Amharic and then in high school English.

Ethiopia is also where the coffee bean originated.

It is also considered the region from which Homo Sapiens first set out for the Middle East and beyond.

Three superstars for today are:
Left – Clive Smith, age 48 from the UK. Clive is married with two kids and is a cycling coach for over 60 schools in his part of London. A former banker, Clive did the “Hippie Trail,” with the the TDA in 2011. ( It’s the cycling tour of India). He will be departing in Adis Ababa.

Center – Jean Brown is married and lives in Chicago. Her two girls are 12 & 7. A well healed traveller, Jean has lived in South Korea and Tunisia. She’s a Girl Scout Mom and if I had to guess her profession, I’d say a secret service agent. She’s doing the entire tour.

Mike Carter, “Crash” is 55 and from Toronto. He joined us in Khartoum and will be riding to Lilongwe, Malawi. Mike has his own visual communications business and is an avid mountain biker. Proud father of two great sons, ages 24 & 21.