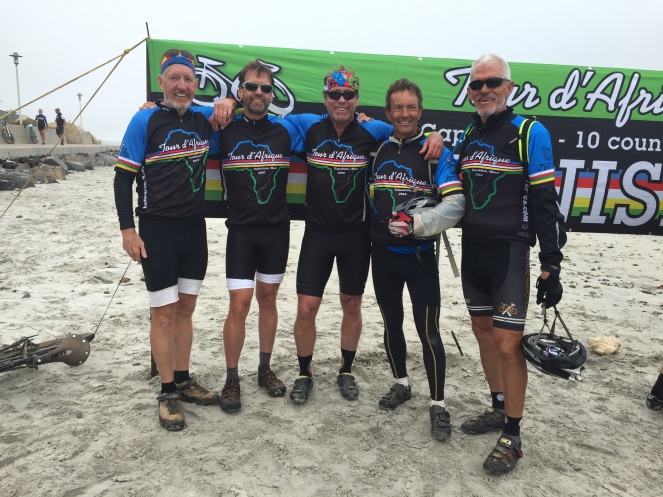 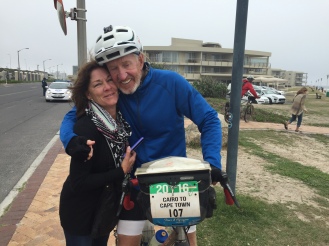 Mary at the finish line 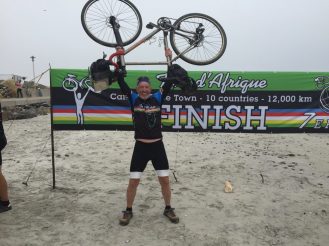 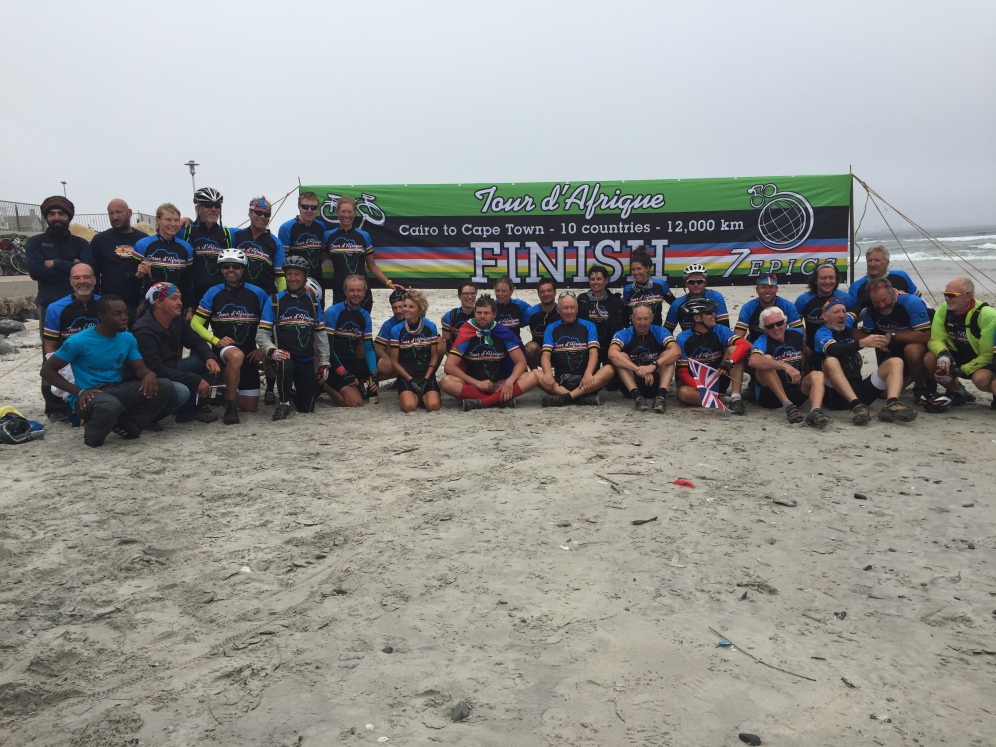 Greetings from Cape Town,
It was an incredible journey these past four months. Ten African countries and 12,000 km, (7,500 miles) of exhausting riding. It was a true test of will and perseverance, as the TDA made every day a challenge. The cycling was tough, as we trudged through mud, sand, gravel and climbs that seemed to ascend to heaven. However, pedaling was only part of the story, the deplorable conditions that we endured, especially the first two months of the trip, had our emotions and nerves on the edge. At times, some riders broke down into tears, others screamed profanities and most everyone asked themselves, “why am I doing this?” Riding, laughing, suffering and being totally caught up in spectacular scenery became a way of life for 121 days. It was a lifestyle.

It was an amazing group of people, that made this epic adventure bearable through the back roads of “The Dark Continent.” The TDA staff was exceptional, led by our fearless and knowledgable leader Tallis Wessels. He was a firm, fair and fun loving commander that led a traveling circus in many respects. The cast of characters that committed to this mind blowing experience stuck together in thick and thin. Sickness, injury, dark moods and total fatigue, nothing stopped anyone from supporting their fellow journeyman. It really was incredible, how even if people weren’t the best of friends, they would find ways to help out in times of stress and chaos. I can’t say enough about all my fellow TDA 2016 champions and want to express my sincerest gratitude for their support and friendships.

In some respects we only saw snapshots of Africa, as we cruised through villages and remote areas of the continent. However, in many ways seeing the world from the saddle of your bike is both physically and mentally satisfying. It’s an education in itself. You see how people live, cultural habits and get close to nature. You learn more about yourself and what is important in life. God, family and the simple things are all you really need.

A special thanks to my wonderful wife Mary, who puts up with my off-the-wall and sometimes eccentric behavior. Love you. 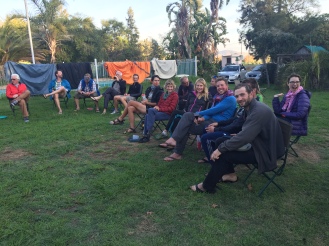 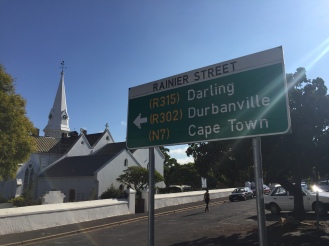 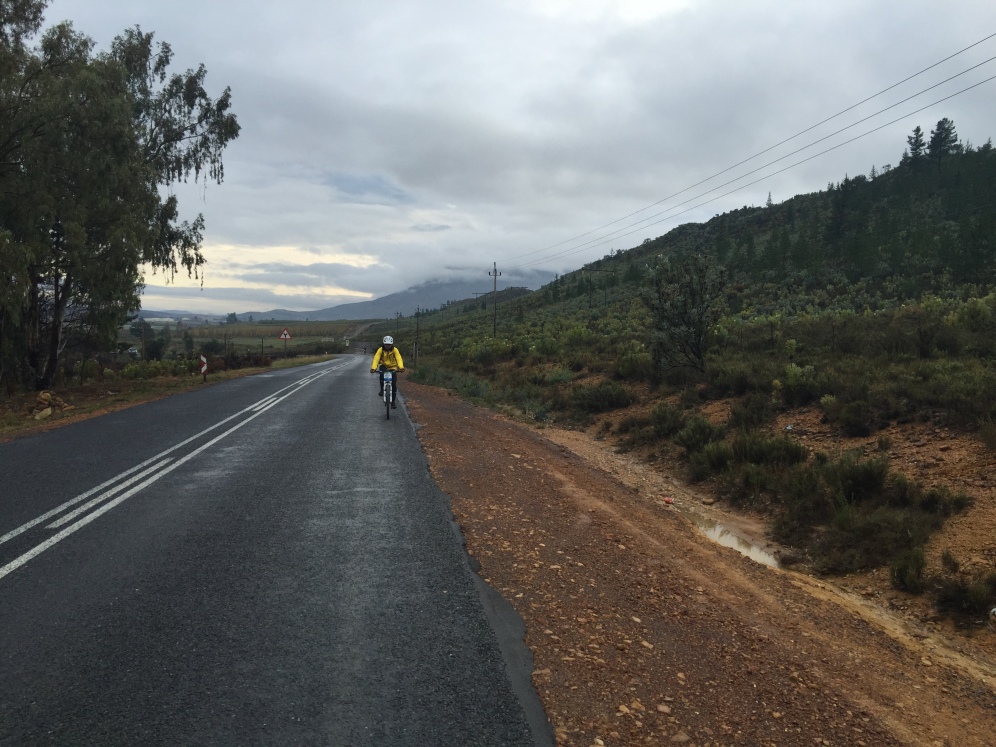 Greetings from about 90 km outside Cape Town,

For the past two days I’ve been singing one of my favorites, from Frank Sinatra, which seems to match my mood, as we close in on Cape Town;

“And now, the end is near;
And so I face the final curtain.
My friend, I’ll say it clear,
I’ll state my case, of which I’m certain.

I’ve lived a life that’s full.
I’ve traveled each and every highway;
And more, much more than this,
I did it my way.”

Regrets, I’ve had a few;
But then again, too few to mention.
I did what I had to do
And saw it through without exemption.

I planned each charted course;
Each careful step along the byway,
And more, much more than this,
I did it my way.

Yes, there were times, I’m sure you knew
When I bit off more than I could chew.
But through it all, when there was doubt,
I ate it up and spit it out.
I faced it all and I stood tall;
And did it my way.

I’ve loved, I’ve laughed and cried.
I’ve had my fill; my share of losing.
And now, as tears subside,
I find it all so amusing.

For what is a man, what has he got?
If not himself, then he has naught.
To say the things he truly feels;
And not the words of one who kneels.
The record shows I took the blows –
And did it my way!

Wow, that sums it up pretty good.
Ciao
Easy Rider 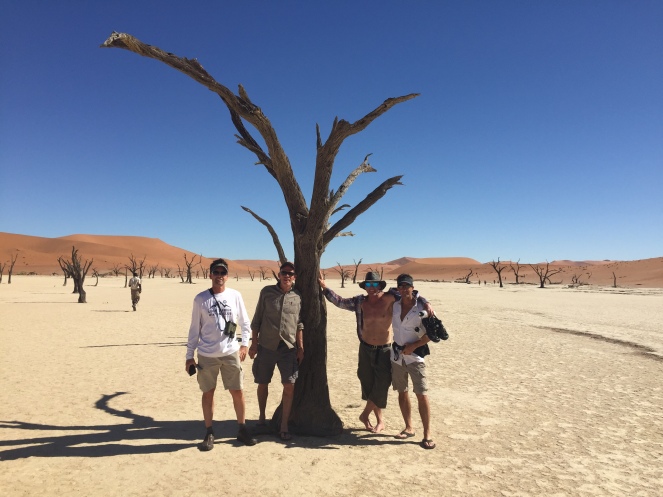 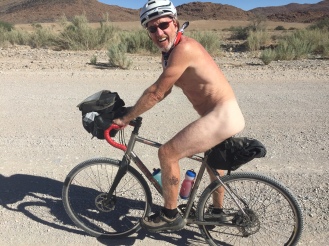 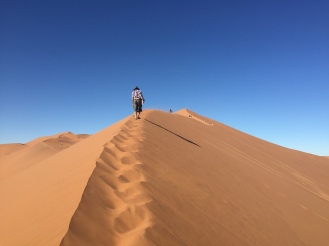 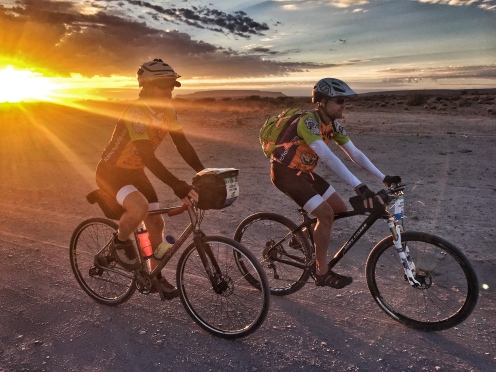 Troy & I early am start 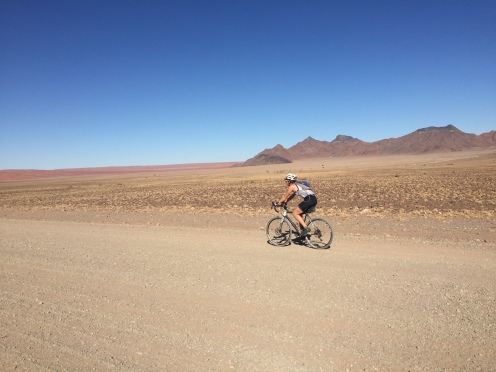 Greetings,
Namibia is a gem. There are only two million inhabitants in this primarily desert climate. It hosts the largest sand dunes in the world, but parts of it have a fantastic wild life population. The Etosha National Park is suppose to be a top spot for safaris and game drives. We didn’t make it that far north, but I’m told it should be on your bucket list.

We left Windhoek on April 28th for three difficult days of off-road riding and arrived Sesriem for a rest day at the dunes. The second day was the traditional “naked mile,” in which the riders had the option of riding any distance in the buff. The majority of the full tour cyclists participated at some time during the ride. Despite my fear of showing the sun my bare fanny for too long, I let the breeze cool my “schwetty balls” for a mile or two, (only to quote Alex Baldwin on a very funny skit that Saturday Night Live produced).

The dunes of the Namib Desert were stunning. A group of us got up bright and early and toured the area. We scaled “Big Daddy,” a monster of a sand dune, that protrudes 280 meters, (924 ft), from out of the desert. The ascent was arduous, but offered incredible views. The descent made us all feel like kids, as we ran down a steep section of the dunes, yelling and screaming, trying to keep our balance. At the bottom we tumbled into the dead vlei (dead pan), an eerie dried out seabed, with unusually shaped dead trees. Lifeless in most respects, a few bugs and geckos were spotted in this barren, but spectacular, part of the world.

After our day of rest, we started a five day section of grueling off-road riding. The roads were very unforgiving and offered a fair amount of washboard, but the biggest challenge was the heavy sandy soil that had a little gravel sprinkled in. You would go from 25 km/ HR to 5 km/ HR in a matter of seconds and would have to grind through the sand. For many of us, that don’t do a lot of sand riding, it meant getting off the bikes and drugging through the desert soil via foot. It was slow going for many of the 290 km, (180 miles), we covered the first two days. One difficult morning, it took many of us six hours to cover 70 km, (44 miles) and that was just to get to lunch. The last three days were much more of the same. We finished off the section with a 171 km, (106 mile), primarily off-road trek into Felix Unite Camp. A scenic, comfortable sojourn, where we’ll rest for a day before our final push into Cape Town.

I’d be remiss if I didn’t mention, or should I say gloat about my biggest cycling accomplishment since Cairo, almost 4 months ago. Emma Houterman, a 30 year cycling phenom, who has won more stages this tour, than I have had flat tires, (about 20), was passed not once, but multiple times by your’s truly. YES, I passed Emma on the road. Normally, if Emma leaves before me, I don’t see her until camp and she’s arrives hours ahead of me. Or, if I start before her, then she breezes by and leaves me in the dust. Well that wasn’t the case for two days this week. Both days started as usual, with her blowing by me, on the sandy gravel off-road. However, amazingly I caught her and bolted by with a sly grin on my face. Her response, “Chief, how’s this happening.” I couldn’t give her a logical reason. A few kilometers down the road, I stopped for a photo and she pressed past with a glance that said, “Get back in your place old man.” Once again, I caught her and slipped by with her bellowing, “Chief, how’s this happening?” The smile on my face said it all. The same scenario happened a few more times, over the two days, much to Emma’s chagrin. For me, these moments of glory were intermittent, but relished. If I was writing for the NY Post, the byline would be, “Sixty-two year old cyclist passes Female Dutch Champion, he says it’s better than viagra.”

For you Rancho Feliz fans, Gil’s started to swear at me for
“throwing him into the fire,” but I’m glad to have someone to share the pain. Keep suffering Gil. I love it.